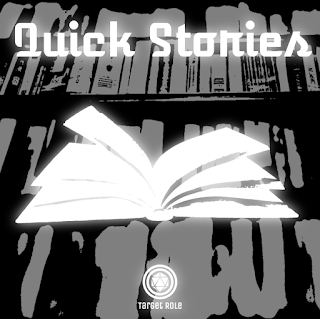 This is a one page guide on how to organize an one-shot story in an easy structure so anyone can easily come up with great ideas for Tabletop Roleplaying Games (TTRPG) without much effort. Note that the stories that come from this structure are very limited, superficial and not focused on any specific genre, this is merely to break the idea of being the Game Master (GM) as something hard for just a few people when actually anyone can be a good storyteller.

To use it, just write your story in the following sections: Background, Overview, Story Hook, Impetus and Keys. Each of these sections are better explained below.

The Background is something that only you as the Storyteller should know, the core of the entire story, the reason that created all the problems and started everything to begin with. It’s extremely important to have this well written in case the players deviate too much from what you have planned, this will guide you as a compass into what should happen next.

This part should be something that will be revealed in little bits as the characters progress into the story, not necessarily everything needs to be uncovered by them but preferably most of it. Also, if the character didn’t manage to uncover everything by the end of the story, maybe it’s a good idea to tell them so they can know what they could have done differently.

This is the most superficial information about the story, something that the players should have access to from the moment they start the game, this not only serves as a first guide for them but also as a way to grab their interest.

Depending on the kind of story you’re telling, the overview is also the background, when there isn’t much more to discover and the characters only need to strive for a goal, like defeating an evil villain or rescuing citizens from a prisoners’ camp.

This is the reason why the main characters of the story are going to engage with the overview of it, depending on how much time you have you may include here the general definition of the characters, like being mercenaries, investigators, officers, heroes answering a call or something like that but if the main characters are free on creation this should be something more generic.

If you’re writing your story to use with your group of friends they can actually help on this part, by giving them the overview of the story, they should be able to create characters that will more easily relate to the whole plot.

Impetus is something that goes against the flow of the story, this means that this part is for you to write about the things that will constantly be messing with the main characters like an organization following them, dangerous creatures lurking around, having limited time to solve a mystery before something happens, and etc.

It doesn’t need to be specifically related to action based scenes but these do make the game a lot more exciting.

This part as the name implies are the key elements of your story, like events, people, clues or treasures that by being found by the main characters (and they should be found) will leave them somewhat closer to understanding the background of the story or getting to the end goal.

The best part of the keys is that they don’t need to be all of the same type, you can have clues, events and special characters listed for your game. A good amount to have for a two-hour long game is something between 10 and 15 keys, and since these are what you will be consulting most of the time, it’s a lot easier to write them in topics to make them distinguished from the rest.

An alternative to topics is making a concept map, listing your keys as if they were a map connecting to each other, this way you know how many scenes you’ll have and how they connect.

Depending on the RPG system you are using, once you finish writing your story you need to adapt the tasks difficulties and characters’ statistics for the game. When it comes to this part there is no generic tip to be given, each system should already have some tips on adapting a story to your game and how to handle these situations and they vary a lot from one to another.

The best for us to do right now is recommending a beginners’ friendly system that requires not adapting or stats whatsoever, these are our own published games Skill Heaven or All in One, both are pretty quick to set up and run having only the story written.