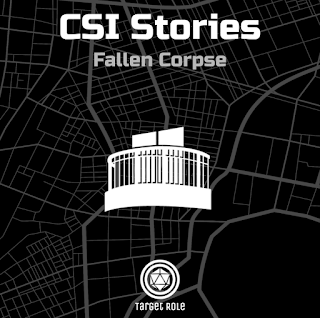 CSI Stories is a collection of short stories for storytelling and Role-Playing Games (RPG) made specifically for the investigative/crime genre of scenarios. To play this story you’ll need one player to be the Storyteller, who will give you information about the story, clues and etc, and 2 to 5 players to play the roles of the Investigators, all of which are CSIs with different expertises. Also you’ll be needing a RPG system and for that we recommend an investigative focused one to make it easier like Ephemeros: Crime Scene Investigation, which can be found at www.targetrole.com.

As a tip to the storyteller: In this kind of stories make the time relevant! If the investigators are taking too long to find a clue, call it a day (in game time), if they decide to investigate something that takes a laboratory, then make it count as a whole day too. Don’t let them have infinite time, because when it comes to investigating crimes, time is everything.

The Crime and What We Know So Far

A woman's body is found lying on the asphalt floor of a busy avenue. Apparently the young woman fell from the seventh floor, from her apartment’s balcony. The body was found at about 2:00 AM by the building's doorman, who called the police immediately upon hearing the sound of her fall.

The young woman was identified as Bette Davis, 30, who lived alone in an expensive apartment and was last seen arriving accompanied by a couple in the previous night around 8:30 PM.

Sam Jones has been a doorman for years in the building where Bette lived. He always seemed very solicitous and respectful but due to his gambling addiction he was constantly involved in debts.

Sam discovered a secret about Bette's profession and began to blackmail her, without success. But he knew that the girl kept a good part of her money at home.

On the night of the crime, he planned to catch her at another of her secret meetings and had hidden a camera in her apartment to obtain evidence to force her to pay the amount she needed. Seeing the departure of the couple of clients of the young woman who works as a luxury prostitute, he decided to go upstairs. Having a copy of all the keys, he managed to enter without her noticing. However, he wasn't counting on the fact that she had discovered the camera before he entered the apartment, they clashed and he hit her head with an iron statue that was on a table in the living room. Terrified to see that Bette was unconscious, he took the money he went for, and knocked over some furniture to fake a robbery.

Bette woke up, they clashed again but this time she fell off the balcony. Sam went back to his post, turned the security camera back on, waited a few minutes making sure she was dead and called the police.

Bill and Hannah are a very conservative couple to most people, but secretly they have been faithful customers of Bette’s. Not wanting to admit it, the couple completely unacknowledged what they were actually doing that night, only stating to the police that they were old friends of Bette’s and were only having a friendly dinner with her.

By omitting the facts, the couple not only seem as the main culprits as well as visually seem like hiding something, leading the investigators into a wrong conclusion, which may completely free Sam Jones from any charges.