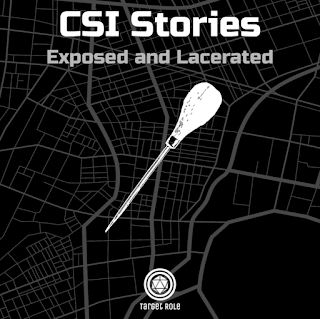 CSI Stories is a collection of short stories for storytelling and Role-Playing Games (RPG) made specifically for the investigative/crime genre of scenarios. To play this story you’ll need one player to be the Storyteller, who will give you information about the story, clues and etc, and 2 to 5 players to play the roles of the Investigators, all of which are CSIs with different expertises. Also you’ll be needing a RPG system and for that we recommend an investigative focused one to make it easier like Ephemeros: Crime Scene Investigation, which can be found at www.targetrole.com.

The Crime and What We Know So Far

A couple was brutally murdered and their bodies were found at 3 am in a hotel room in Miami. After exceeding the estimated time for occupying the room, one of the hotel’s employees went to check them out and came across their bloody bodies, then she immediately called the police.

They were identified as Daniel Cooper, 32 years old and Olivia Byrnes 29 years old.

David Byrnes, husband of Olivia, a successful 54-year-old businessman, has always given in to his wife's whims, trying to make up for the long hours away for work. David discovered a few days ago that his wife was cheating on him with one of his trusted friends, and he decided to follow her on the night of the crime in order to catch her in the act, with the help of one of the employees of the establishment, whom he bribed for entering without being noticed. However, when faced with the scene of his wife's betrayal, he did not contain his fury and attacked the couple with the ice pick that was on the bedside table. First hitting Daniel who died in the arms of his lover, then strangled his wife, disfigured her face with the mincer and ran away with the murder weapon.

Daniel's wife Nora Cooper, 30, had paid a private investigator because she was suspicious of her husband's betrayals. Nora was known for her possessive personality and on the night of the crime she called her husband to end the relationship. She spent most of the night in a city bar near the hotel, raising suspicions that she might be the perpetrator of the crime. Nora was unjustly detained, and investigators need to think of other possibilities in order not to let an innocent person be convicted.